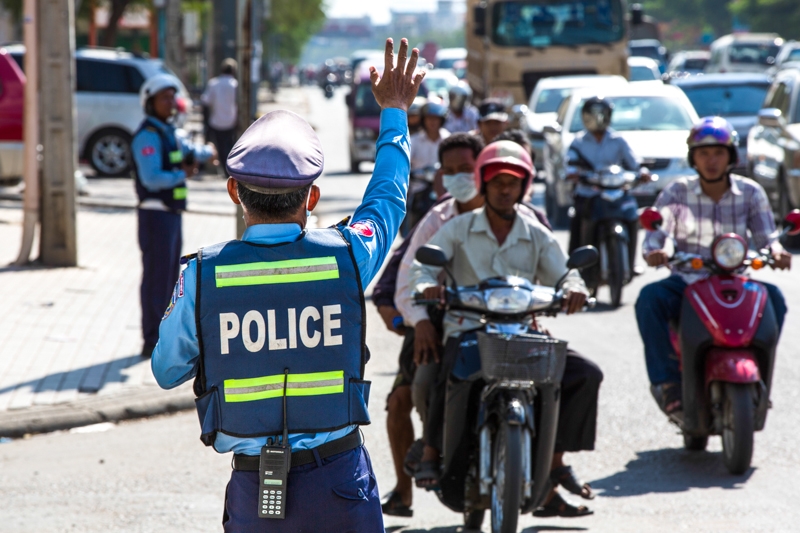 On December 15, 2018February 5, 2019
by lovethelims
in Lim Posts
Leave a Comment on Breaking Traffic Laws

“In everything set them an example by doing what is good. In your teaching show integrity, seriousness and soundness of speech that cannot be condemned.” (Titus 2: 7-8)

A couple weeks ago I got pulled over for the first time in Cambodia by the police. I’ve heard many stories about the police here and many say it’s best to avoid being pulled over by swerving away from them or speeding away as the police are on foot. They monitor intersections and usually pull people over for not wearing helmets while driving their moto’s or going through red lights. But we have heard they also pull people over to just make some money. When you get pulled over, you simply show them your license and pay a ‘fine’ immediately. From what I’ve heard, the government allows them to retain part of the fine to cover their wages and the wages of their team. The remaining funds go to the government. There are many stories of people being pulled over for illegitimate reasons which leads the population to distrust the police.
I got pulled over for having my headlights on during the daytime. I was in a parking garage so I had my lights on, but I forgot to turn them off when I exited the parkade. In Cambodia, only VIP vehicles are allowed to drive during the day with headlights on. I quickly did what I was previously warned to do: I took my wallet out and threw it to Dave N. in the car to hide for me, then I grabbed our emergency police money from the car storage. I got out of the car and spoke to the officers. I showed my ID and in my broken Khmer explained I didn’t realized my lights were on. When he asked for money I simply showed him my 11000 riel (roughly $2.75). If he had seen me with my wallet, he would probably have asked for a few USD bills in my wallet. The officer accepted the small amount and shooed me off. I left apologetically. Definitely my cheapest fine, short of a warning.
As I process this, I think of the traffic police force as a legitimate group of workers trying to make a living. But it’s odd to teach my kids that the police here are very different than the police from Canada. The police where we are from do everything from solving crimes to traffic patrol. Here they are supposed to do the same but many view them as corrupt and they do not always protect and serve. I’m not sure I can view them as completely corrupt as they did pull me over for a legitimate lawful (yet silly) reason. But I still wonder who we should call in case we get robbed, kidnapped or if we are in a major accident. It’s strange to distrust those that are suppose to uphold the law.
I think this can be similar to how people view Christian organizations. The clergy are supposed to be serving and not self-serving; trustworthy and not abusive. Yet the media has highlighted many reasons why the church can’t be trusted. Clergy raising money for private planes and yachts. Abusive church leaders being exposed. It makes me want to cry out, it’s not supposed to be this way! We know there are honorable police officers in every country, as there are untrustworthy ones. We know there are some unethical servants of God, but also many exemplary ones. I strive to be a leader that wants to shine Christ’s light and build trust for all in ministry.